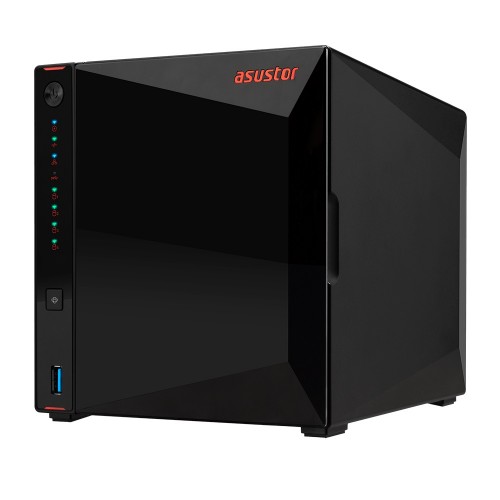 The Nimbustor 4 utilizes the Intel Gemini Lake Celeron J4105 Quad Core CPU and is 30% faster than Apollo lake. The Celeron J4105 also doubles the on-chip cache to 4MB, making the Nimbustor 4 one of our fastest NAS devices ever. The Nimbustor 4 comes with four Gigabytes of DDR4 RAM and can be upgraded up to 8GB. DDR4 RAM provides up to 30% greater performance than DDR3 while also lowering energy requirements by 40%.

The Nimbustor 4 provides two 2.5-Gigabit Ethernet ports. Enable up to 150% faster performance than Gigabit Ethernet with compatible hardware and up to 5 Gbps using Link Aggregation.

Your own streaming center. Stream your from a phone or tablet as well as a computer to multiple streaming platforms, Including, but not limited to Twitch, YouTube, Facebook, Instagram, Restream or RTMP compatible platforms. Unlike services like restream.io, ASUSTOR Live doesn’t require fees to operate to stream to multiple platforms and channels which saves you money and streaming resources. Recordings can be safely saved to your NAS for future use.

YouTube and Twitch as cloud platforms are not always reliable with long-term archival of content and videos may be deleted without notice. For that, ASUSTOR provides Takeasy, an app that downloads videos from YouTube and Twitch for archival purposes and can automatically download all public content from a specific channel.

The Nimbustor 4 supports up to 72 TB, enabling storage of large live streams and videos. Complement gameplay recordings with a NAS. Not enough? Expand your Nimbustor with up to three AS6004U expansion units for a total of 216 TB.

The AS53 series devices produce only 19 decibels of noise during system standby, equivalent to the almost inaudible sound of a pin drop. During system operation, only 32 decibels of noise is produced, equivalent to the hushed tones of a quiet library, allowing the AS53 series devices to seamlessly and comfortably integrate into any living environment.

All ASUSTOR NAS are designed for and are suitable for 24/7 use. ASUSTOR NAS devices have also undergone rigorous tests, such as drop tests and burn tests to test durability in extreme conditions. Heatsinks were added to sensitive components to dissipate heat, helping to maintain the longevity of the device.

ASUSTOR NAS products are designed and developed around ecologically friendly concepts. When in use, our devices consume far less power than the average computer or server. Furthermore, our advanced power control features allow you to more efficiently manage your NAS device and hard drives. This lowers your electric bill and prolongs the lifespan of your hard drives all at the same time. While in disk hibernation, the AS5304T consumes only 12.6 W of power. Under normal operating conditions it still only consumes 27 W of power.

Snapshot Center is a new feature for ASUSTOR NAS devices to utilize Btrfs and iSCSI volumes to take snapshots of the information inside a NAS. Snapshot Center supports up to 256 snapshots of a volume and can be done every five minutes, creating a backup that can be restored easily if data is damaged or lost.

Get specific details about this product from customers who own it.